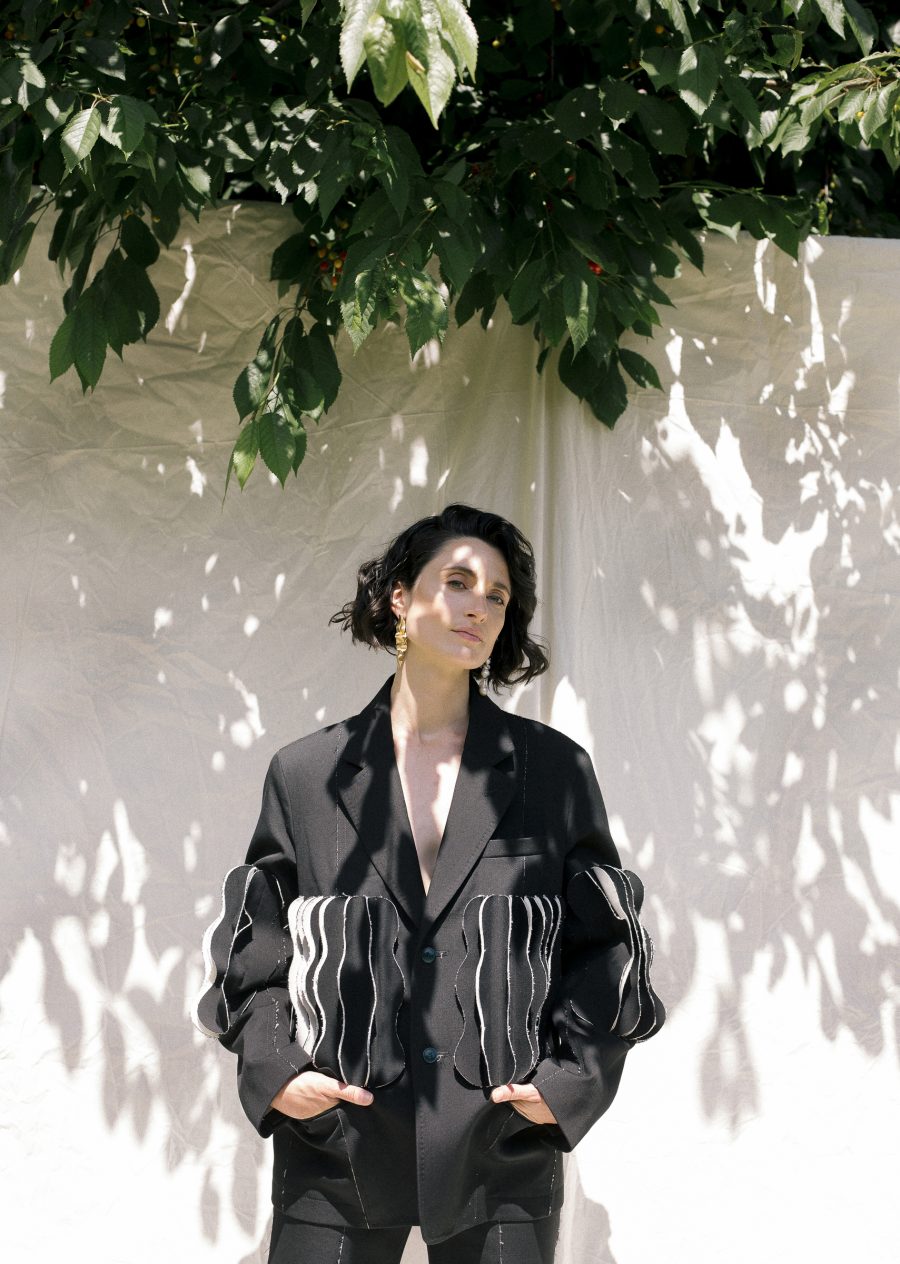 Jacket and trousers by Toga, earrings by Completed Works

Best known for her portrayal of Lizzie in hit BBC series Peaky Blinders, Natasha O’Keeffe talks to Also about Lizzie’s impressive rise, making the final emotional season and how she has navigated family and work life during the pandemic. 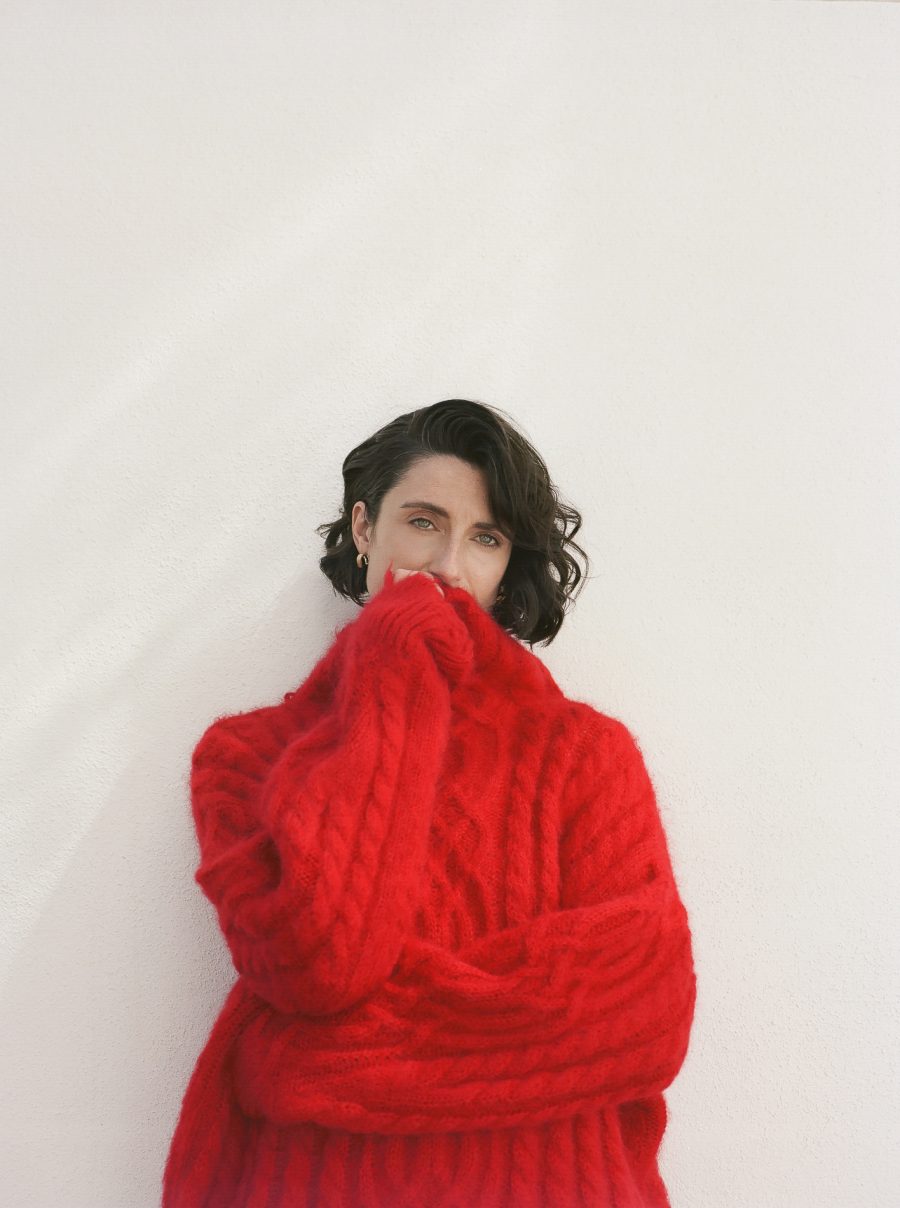 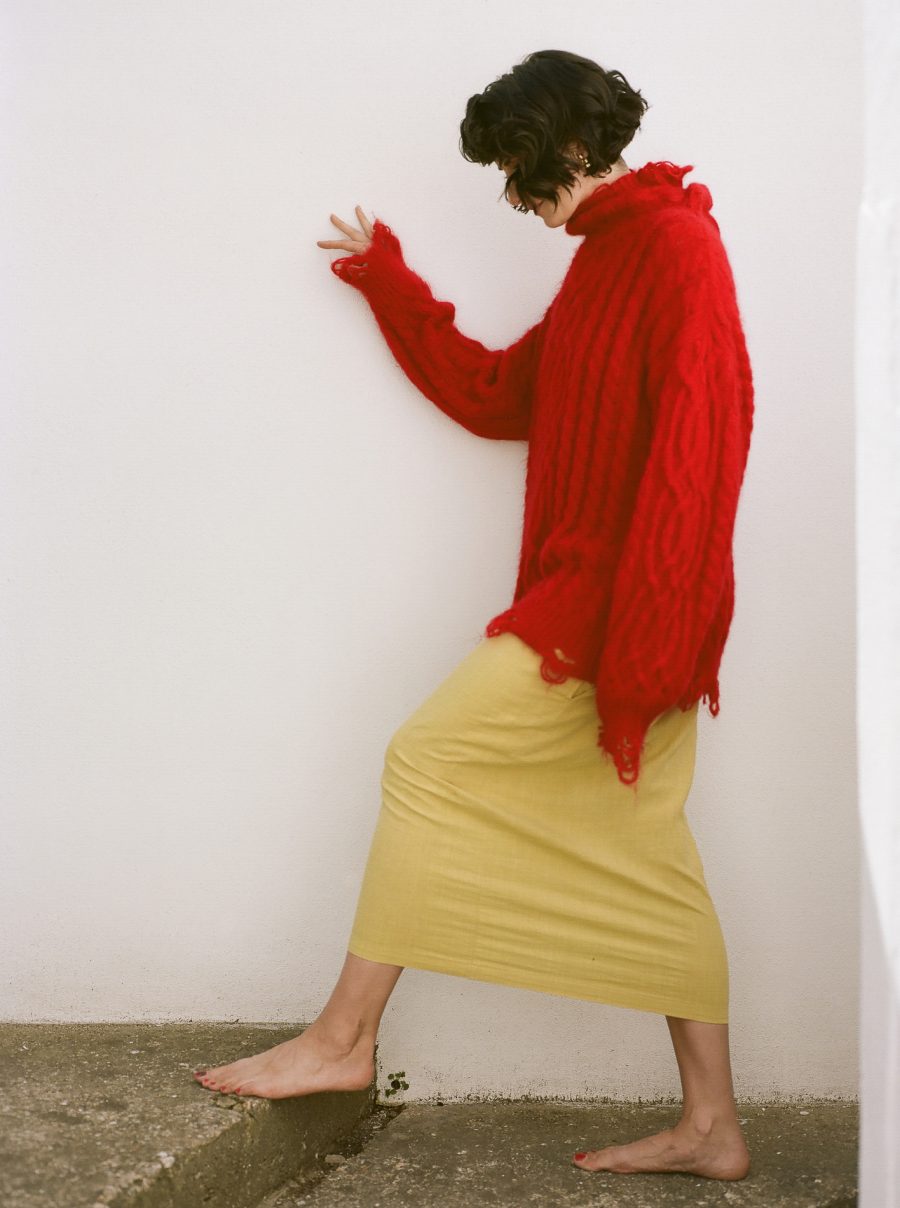 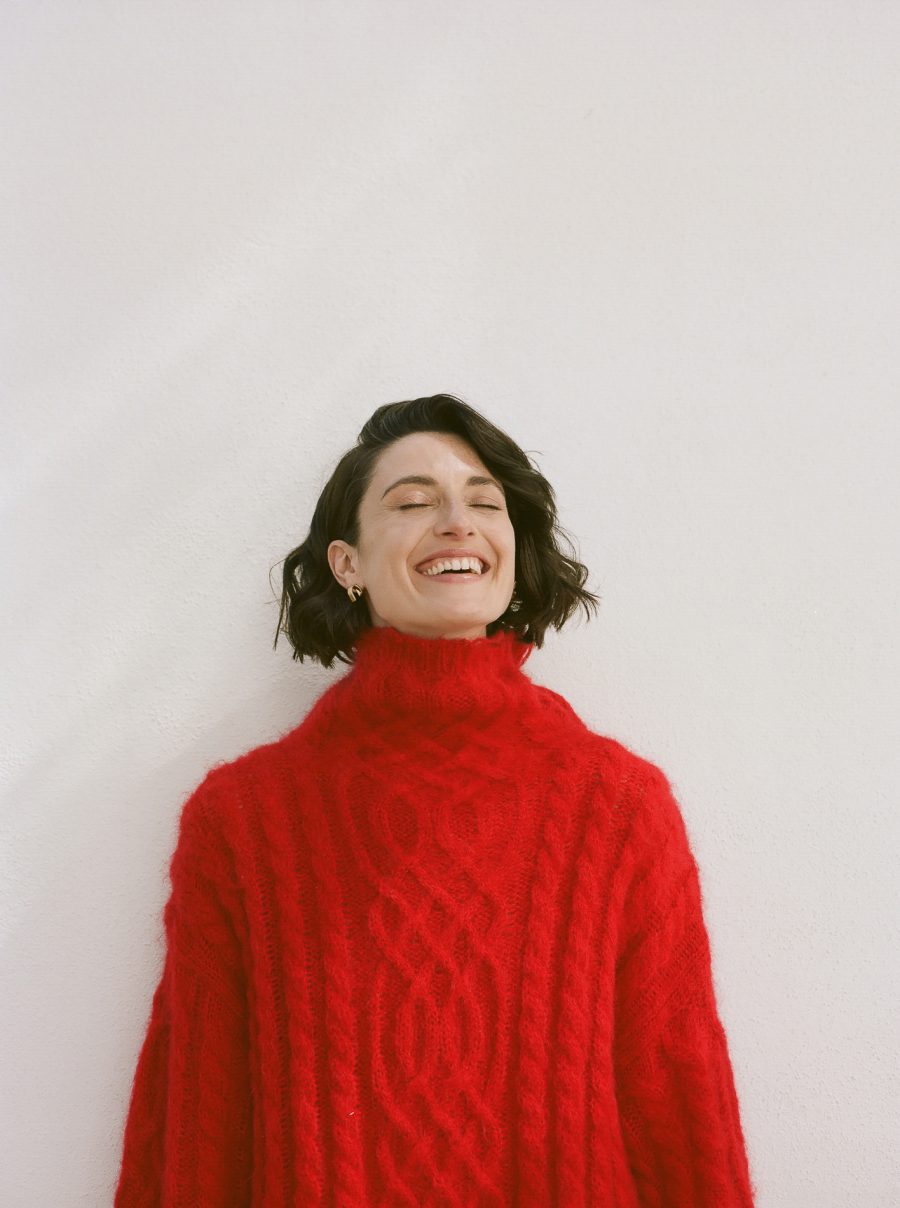 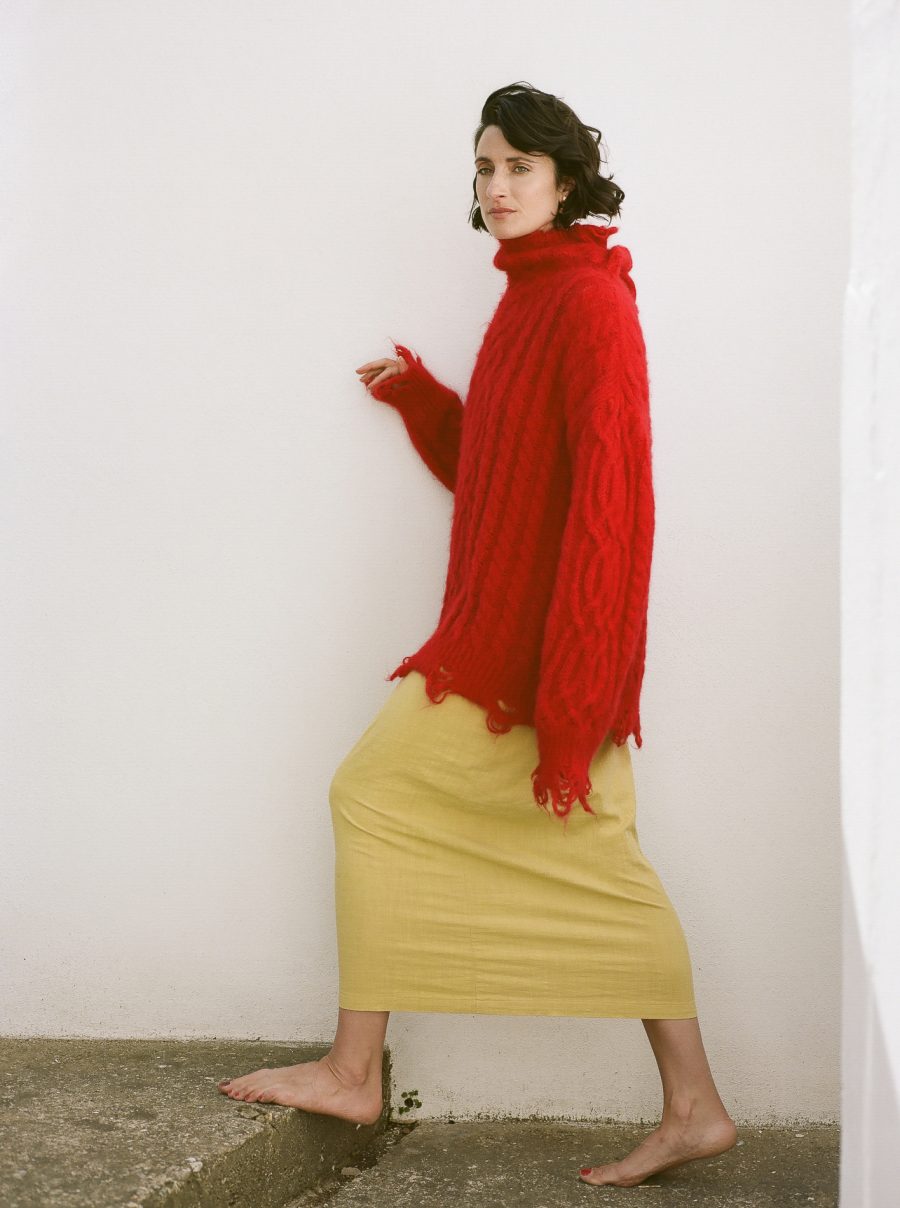 Let’s get straight to it and talk about Peaky Blinders. You play Lizzie who is possibly my favourite character and I am excited to talk to you about her. For those who don’t know (I insist you go and watch the whole box set immediately on iplayer) Lizzie starts off in season 1 as a prostitute and by season 5 is the wife of the head gangster Tommy Shelby and lady of the manor as it were. How much did you know about the journey Lizzie would go on when you started and how has it felt to accompany her on this ascension?

Ah delighted to hear you’ve got some love for the Liz. That’s nice, thank you!  She’s been a banger to play and there’s been the gift of time over the seasons to watch her arc develop and expand. It has been a beautiful way to journey with her. I had no idea that this is where Lizzie would wind up when I came on board the show! This was purely because the creator, Steven knight, had no idea that this is what would happen either! He wrote that scene in the first series in an exchange between Lizzie (then in her prostitution years) and Tommy Shelby in a car not knowing that she would become his second wife and very much part of the Shelby family and it’s future. It was a very small role in that first series. It was only after Steven saw the scene physically that the idea came to him that this is where he would take her.

I think of Lizzie as this wisened woman who’s come from being that street urchin on survival mode of the impoverished streets of Smallheath, Birmingham in the 1920’s and she is determined from the get go that she has no wish to revert back to that kind of life. She quietly gets to where she is now. There is a beauty in doing a series over a few years- there’s time in which to nurture and get to grips with a character and it also gives an audience room to invest in the characters they are watching unfold too ya know. It’s been a very gratifying ascension with Lizzie 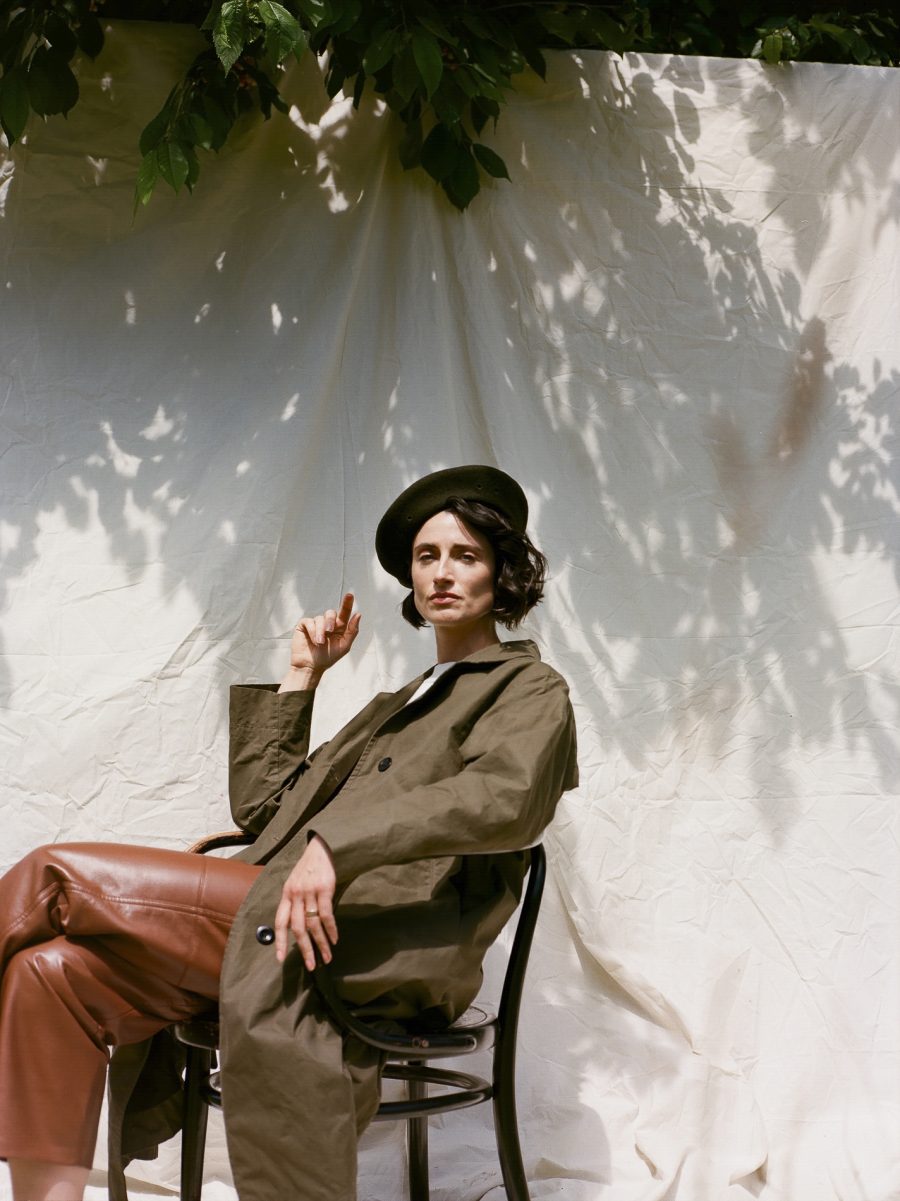 Coat and hat by Margaret Howell, t-shirt and trousers by Nanushka 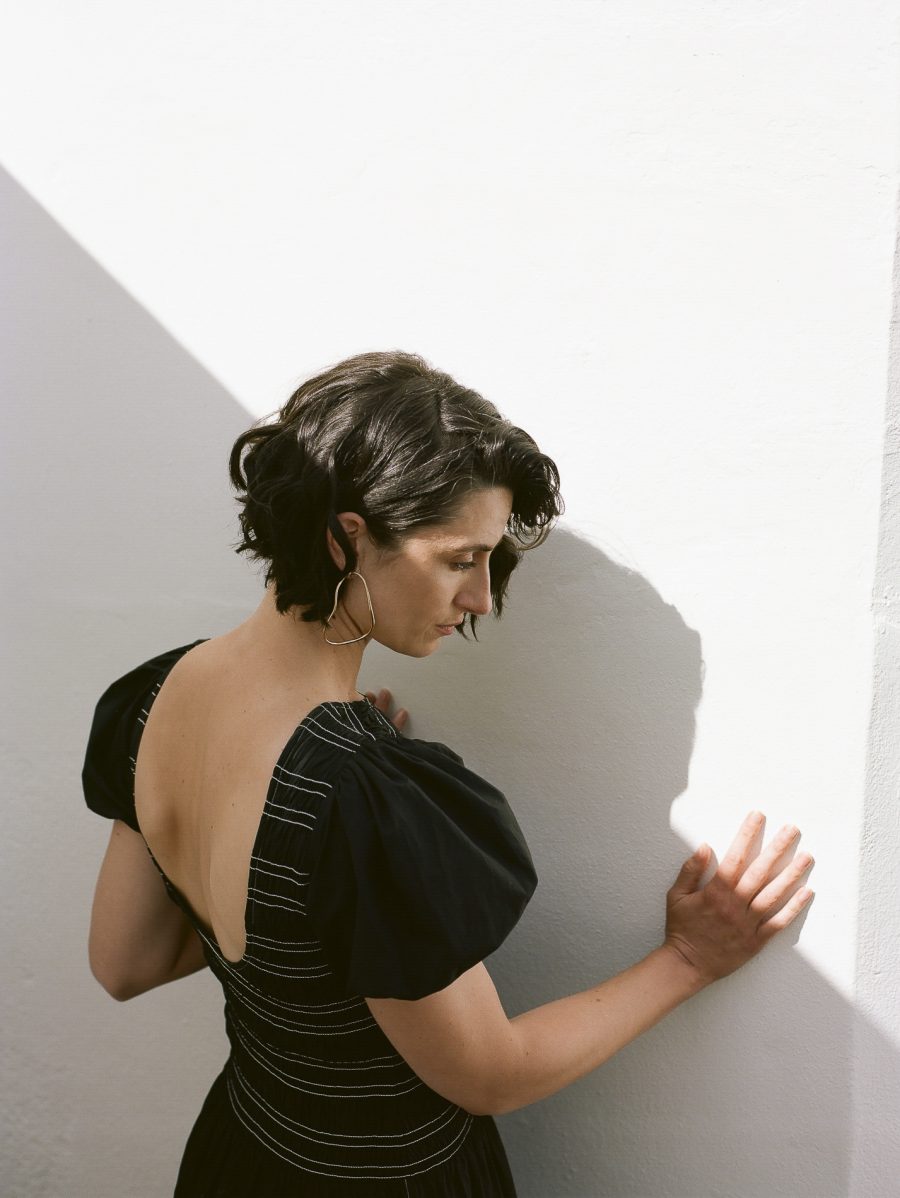 On the face of it Peaky is about a wily gang of men lording over their local area enjoying a life of crime, booze and loose women. But it becomes apparent quite early on, as is so often the case, that the women in the family hold a lot of the influence, increasingly so as the seasons progress. Including a standout performance from Helen McCrory as the matriarch of the Shelby family, I found these strong female roles particularly invigorating. There must have been some edifying moments on set?

There is that much welcomed female anchoring throughout the show for sure. The show needs these sort of calm but firm figures to keep things from spiralling totally! This doesn’t mean they are boring by any means….The matriarch of the show, Aunt Polly, who we have missed greatly this year, on both a professional and personal level has been at the core of the Peaky women. Her vibrations reverberated through all of us women on the show. She was a guiding light. I would get excited when reading the scripts, if ever a scene came up where I got to act with Helen, as you knew there would be some guaranteed spine-tingling moments on set with her about. Aunt Polly and Lizzie had quite a sarcastic tone with one another. Aunt Polly was prone to dig at Lizzie about where she came from and her past life but with a glint in her eye that suggested ‘respect girl, respect.’

Instead of the stereotypical representation of a group of women together gossiping about something petty on the doorstep, their conversations have that bit more at stake in the show. The Peaky women are right in the middle of the firing line and making sure the right chess pieces are being moved in the Shelby family business. They are family and business protectors. Those family business scenes were special filming days. 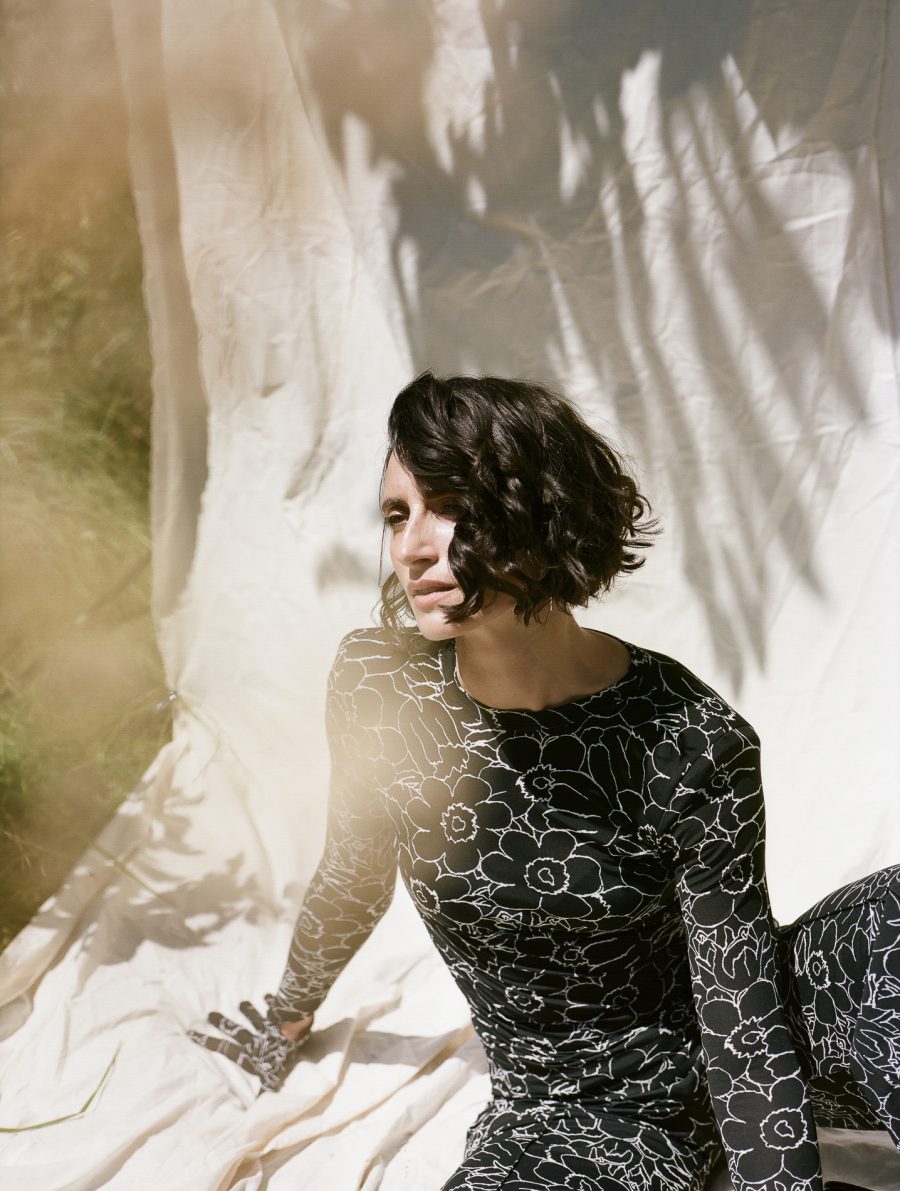 Top and trousers by Toga

Helen McCrory passed away during production of season 6 which was also during the peak of the pandemic, it must have been incredibly emotional making this final season?

It has been such a sad time.  It’s an emotional thing to wrap up on any series where people have become a sort of family over these many years of doing it, but on top of this, for one of the most integral characters and team players to suddenly not be there anymore was devastating. Saying that, she was very much there in the spiritual sense. I would talk to her now and then over the course of filming that final season. I felt her presence. 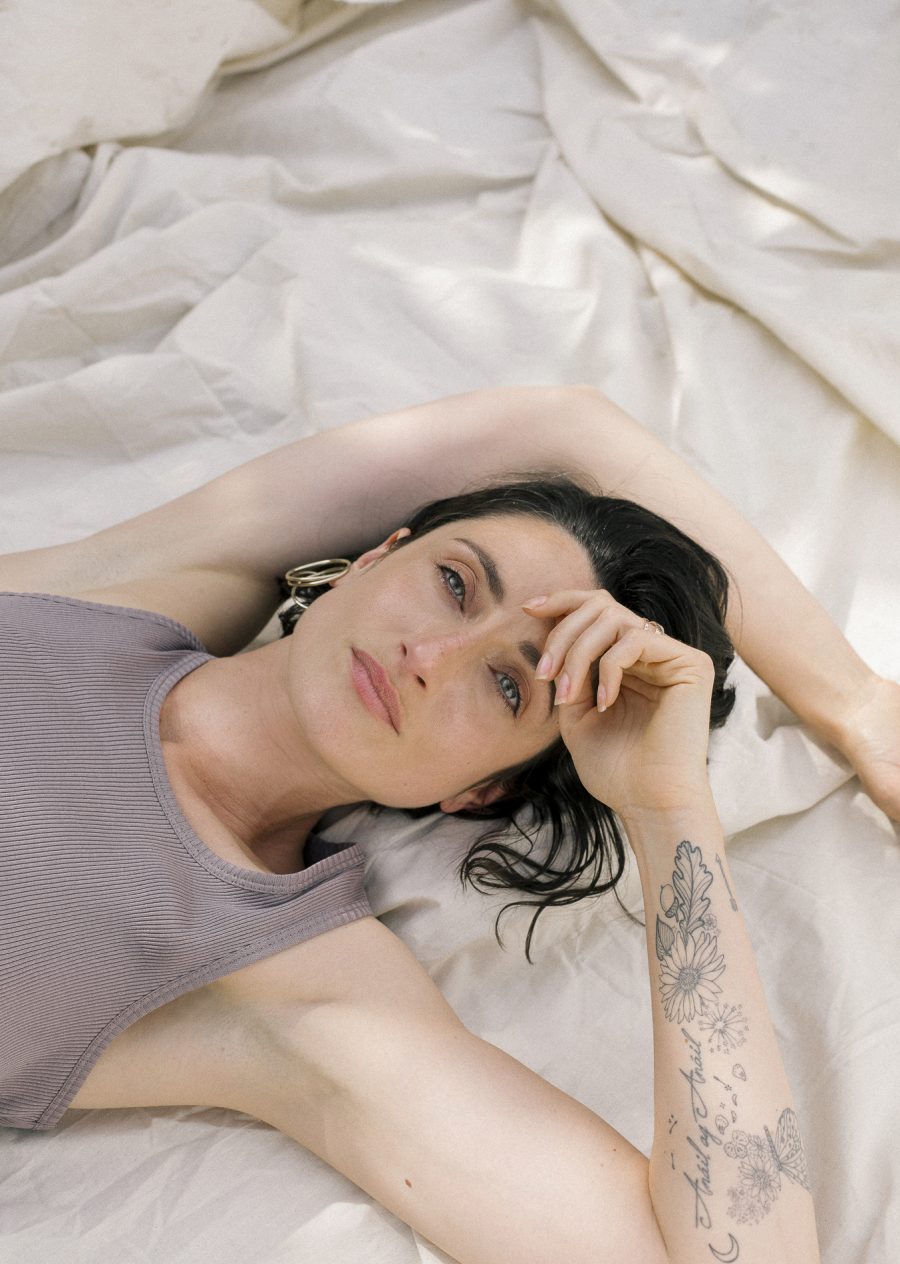 Your next project couldn’t have been more different – ‘Intergalactic’ is a sci-fi romp about female convicts on the run. It must have been really fun and exhilarating to work on something so different?

Intergalactic was mighty fun and a very different experience from Peaky shall we say! The showrunners were aiming to make a sort of ‘Orange Is The New Black’ set in space.  I got to run around with a long wig on and do pretend space ship flying and fighting and worked with a bunch of funny fabulous women. There was a lot of laughter, not much to not love about that and it made it really fun to go to work! Sadly it didn’t get a second go on the merry go round. 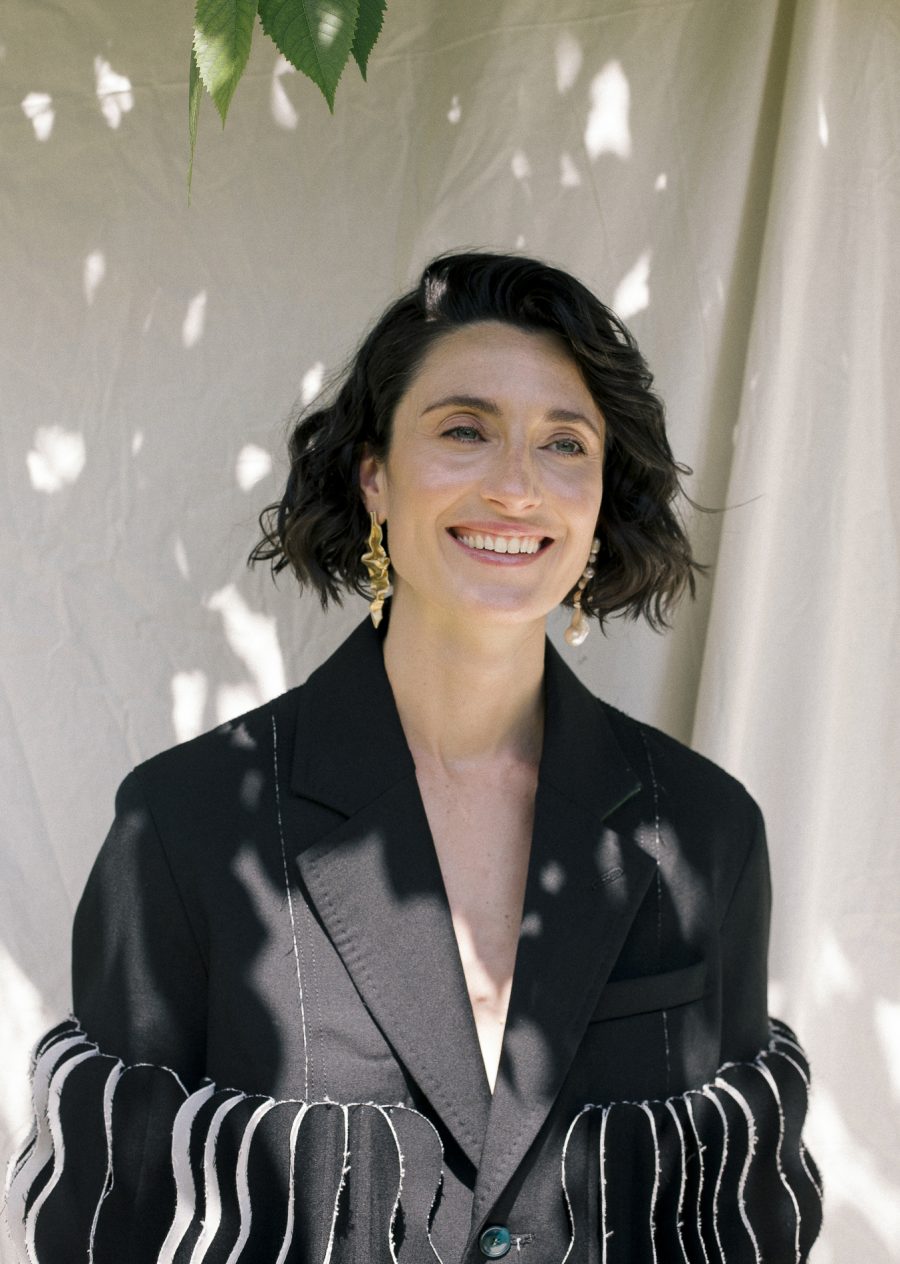 You’ve been working throughout the pandemic, a particularly challenging time for those with kids as well as uncertain for people in the arts. What coping mechanisms have you developed and have you managed any down time?

I was very lucky that I had pretty much wrapped on Intergalactic when the pandemic dramatically paused the entire world. So there was that feeling of craving a welcome break before I stepped back into the shoes of Lizzie for the final season of filming Peaky Blinders. So on a personal level, I tried to embrace the fact I had some proper hang time with the family. I, like everyone else, just couldn’t have imagined that the ‘pause’ button would be more like a ‘stop’ button for an entire year! I think living by the sea in summer of 2019 made it easier for us than for a lot of folks as we had the openness and the sea air to breathe in during lockdown. We were very lucky. It was the winter lockdown that brought the hardship for us as a family; with the battering winds of winter and nowhere was open and you couldn’t socialise for both yourself or the kids. What a world away that already feels! The unknown end was the big psychological test for all wasn’t it. But I don’t want to come across as ‘woe is me’ chatting about it when there were a lot of folk being hit very hard for all sorts of various reasons.

It’s good to see theatres and cinemas all up and running again alongside and the film industry being very much back in business. It’s booming in production land! My religious coping mechanisms during the lockdowns were having a dog to walk and exercising to Beyoncé’s Homecoming album when in need of some headspace from crazed children during the lockdown lulls! 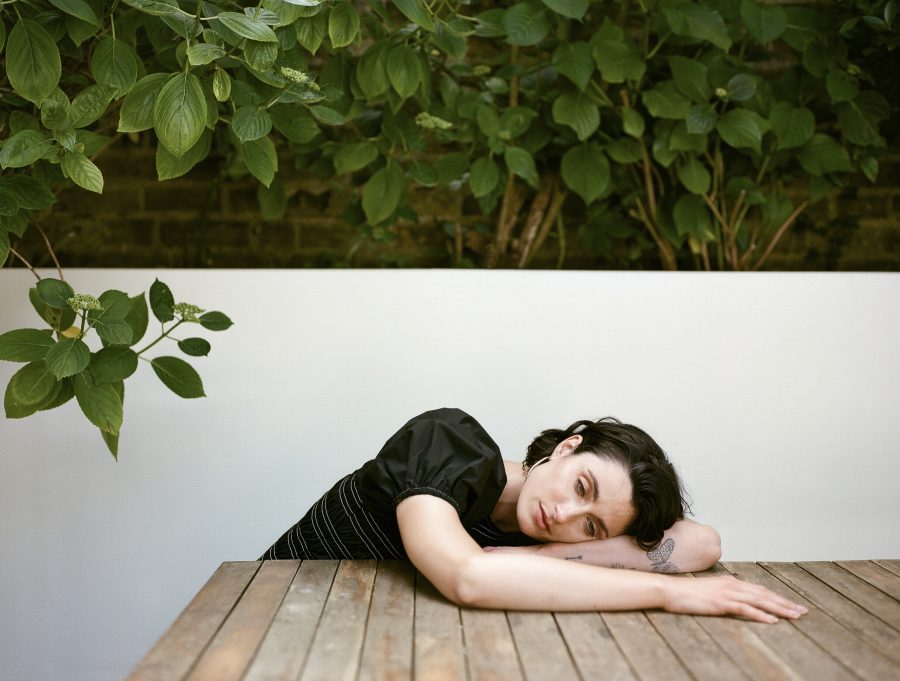 What are you working on right now and what’s coming up next?

I have just started filming on an Amazon series called Wheel Of Time. The first series is due out in November this year and I make my first appearance in the second series. I can’t disclose any more than that, I’ve been sworn to secrecy!

The final series of Peaky Blinders is in post production’s hands right now and will be out early next year. It’s been a long awaited one for sure. 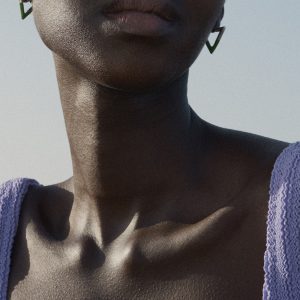 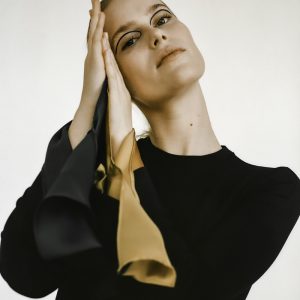 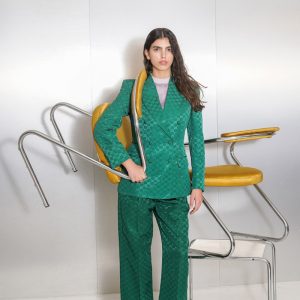