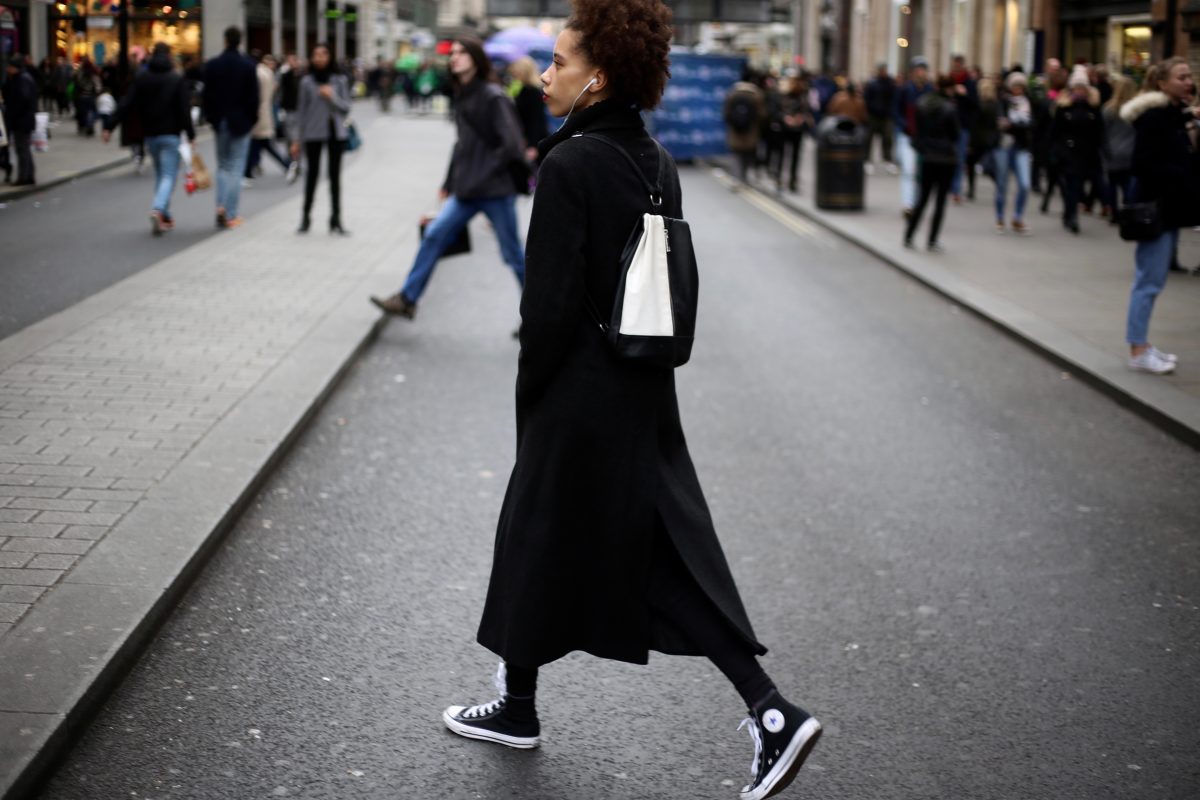 Many things are said to “empower women”, mostly by the brands making the things said to be empowering. Be it weight loss foods, gym memberships, push up bras, little black dresses or anything else that enforces gendered or quasi-oppressive views of womanhood, we have to be careful to see through “empowerment” promises to the hard-sell message lurking behind it, and further still to see whether such products and messages are indeed empowering or whether they perpetuate notions of what women “should” be, or most often, what women should look like.

However, even the savviest women have lately been taking a quiet, foot-level stance in favour of the idea of trainers as empowering. It’s not just a movement against the heels – a second wave feminism go-to symbol of patriarchal containment – because this isn’t about the fact trainers are flat. It’s about more than that, and female sneaker heads are starting to be as much in the pack (and the vast world of online trainer communities) as their male counterparts.

“I love the creativity and versatility of trainers,” says artist and art teacher Briony Auclair. “Anybody, any age, any size, man or woman can wear a pair of trainers. They are filthy in history and have influences in culture, music, sport and fashion. People can be quick to assume a woman in a pair of trainers maybe hasn’t put much creative thought or effort into their appearance, however when you’re wearing a pair of dead stock* Nike Air Max 90 HOA** Infrareds (which took ages to find in your size, and then have the balls to wear) it’s pretty empowering knowing all the effort you’ve gone to make that choice of trainer yet some people don’t have a clue.”

Laura Boric agrees. “Trainers are practical, comfortable and stylish,” she says. “Trainers can empower anyone regardless of their sex, race, age or cultural background. Trainers might empower you to become sportier, or be a bit bolder with your fashion choices, you might feel empowered to climb a mountain or dance in a club until 6am or, as a woman you may feel empowered by the fact you’re wearing the same footwear as your male peers, we’re equal and should be able to dress as such, rather than how society tells us we should dress.”

When you’re wearing a pair of dead stock Nike Air Max 90 HOA Infrareds (which took ages to find in your size, and then have the balls to wear) it’s pretty empowering knowing all the effort you’ve gone to

Naturally, brands have been quick to catch on to how women feel about trainers, and start to use the ideas of devoted sneaker-fans to slowly feed out these ideas of shoes = empowerment to wider markets. Last year Puma collaborated with Solange Knowles to create “Word to the Woman,” Puma x Solange sneakers. The line claims to be about “strong shoes for strong women,” accompanied with an ad campaign celebrating 15 women from various industries including clinical research coordinator at Icahn School of Medicine at Mount Sinai, Mekdes Mersha. They’re trying to say that women are about intelligence and skill as well as model looks, yet the women they’ve selected are all still extremely beautiful, and very photogenic. In 2008 the Nike Foundation launched the “Girl Effect” campaign, claiming that preparing girls for work can help the developing world out of poverty. We’ll let you make up your own minds on Nike’s impact on developing countries and the people who work there.

The idea of footwear as empowerment is, of course, nothing new. High heels have long been seen as leveraging not just height, but a certain strut that can make many women feel powerful and confident. The counter argument is naturally that they are often painful, frequently hard to walk in, and contort the body in ways suited to the male gaze: the tits and arse are accentuated, legs are elongated. The pinnacle of this is in stripper shoes, their heels and soles are as exaggerated as the sexuality and physiques of their wearers. I personally love stripper shoes, and pole dancing, yet the counter arguments for a shoe that’s designed for women, yet frequently done so by men, feels very much for the other half of the population as much as it is for those of us with a vagina.

I personally love stripper shoes, and pole dancing, yet the counter arguments for a shoe that’s designed for women, yet frequently done so by men, feels very much for the other half of the population as much as it is for those of us with a vagina

Maria Tyler works as a PA in London. She sees heels as integral to her identity, and vital to give her a sense of professionalism and confidence. “Being just 5’3″ tall, I absolutely love to wear heels.  I don’t think men truly understand the importance of a woman’s love for shoes,” she says. “Heels definitely empower a woman. Although I wear flats from time to time, for comfort, I immediately feel two stone heavier in them.  Heels alter my posture and accentuate my curves, which gives me a confidence and a sexy strut that I could never have in flats.

“I wear a nice smart high heel in the office, but commute to and from work in a pair of flat comfy pumps, which I hate!  They don’t go with smart office attire.  As soon as I arrive at the office they are kicked off and on go the beautiful heels.  I feel glam again then.  I also feel powerful in a heel.  If someone compliments me on my shoes then I feel good and that feeling makes me feel confident.”

Tyler adores shoes, and their power to alter mood, posture, and a sense of your place in the world. But with that in mind, it was hard and somewhat exasperating to read that Japan has become home to a new movement that aims to help “empower” women by encouraging them to wear high heels, as The Telegraph reports. According to the  Japan High Heel Association (JHA), women should swap sensible flat shoes for stilettos “in order to boost their confidence in society as well as improve their posture.” One saving grace is that the group is made up entirely of women; but the idea that confidence should be found in an object so triangle, datedly associated with what femininity should be feels entirely regressive.

“I find it shocking that it is still legal in the UK for companies to require female members of staff to wear high heels at work,” says Boric. “That’s oppressive, it should always be a matter of personal choice to wear heels. Personal choice is empowering, dictating an individual’s dress code based on their sex is not.”

The idea that confidence should be found in an object so triangle, datedly associated with what femininity should be feels entirely regressive

Even trainer campaigns that aim to show women’s strength through the medium of plimsols seem to anchor themselves in the idea that a good woman is a beautiful woman. In February 2016, Keds unveiled a campaign called “Ladies First” featuring “powerful female influencers” including musician Soko, actress Allison Williams and model-musician Cailin Russo. The problem arrives in one of the supposedly “uplifting” straplines: “Never underestimate a pretty face.” So pretty women can be smart too! And seemingly, they’re the only ones that Keds wants to see their shoes on.

Online magazine Hypbeast specialises in covering stories around trainers, and its UK editor Jason Dike seems slightly baffled around the idea of trainers as female empowerment. “ I don’t really get what empowering means in this context,” he says. “I don’t see a difference across gender lines for trainers. Trainers that have been popular tend to be popular amongst both genders. The only difference would be the use of metallics and other fabrications that men are a little scared to wear.” However, he concedes that the market for women’s trainers is currently more limited than that for men. “There’s some specialist stores that focus on women’s trainers but it’s almost absurd that it’s even got to the point where specialist stores are needed,” he says.

But beyond ideas around gender and empowerment, trainer culture transcends gender-based or sociological issues: it’s a passion, a hobby, and a rapidly burgeoning aspect of culture in its own right. As Boric points out, “trainer culture has expanded massively over the last 30 years.” She says: “It’s great to see a movement with its roots in creative expression and individuality make its mark in the mainstream offering everyone a chance to express themselves through their footwear.”

*Dead stock is slang for a shoe that is no longer available, and in a brand new and unworn condition.

**HOA is reference to Nike’s “history of air” series in 2005. The HOA releases are more sought after as they came with a time line on the shoes Insole, and were in recognition of the Air Max heritage. 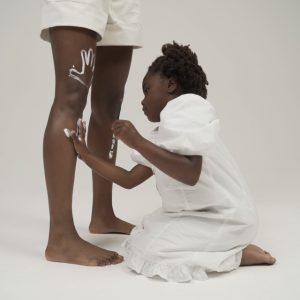 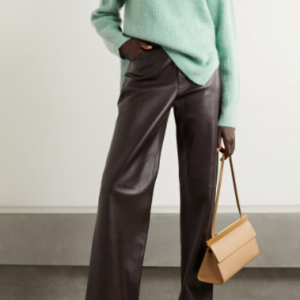 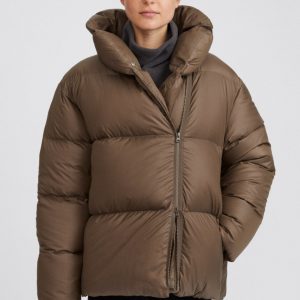